This fall on Food Network’s “Holiday Baking Championship,” contestant Adam Monette of St. Albans has performed at the top of the pack through the first five of eight episodes. He successfully married the odd couple of brandy and lemon curd in a choux pastry crown; deployed canned cherries in a showstopper Black Forest pie inspired by his aunt’s no-bake cherry cheesecake; and crafted realistic cabbages and squash from bread dough for a harvest cornucopia challenge.

Whether the high school culinary arts instructor lands the $25,000 championship remains to be seen, but so far, he has done Vermont proud.

“Adam was super interested, involved in everything and always asking questions,” Mahé recalled. The standout student was selected to compete in several professional culinary competitions. He placed fourth out of 12 chefs from participating countries when he represented the U.S. in the Académie Culinaire de France’s Trophée Passion International in 2017 in France.

“He’s solid. He can adapt. He’s got the training. He keeps his calm,” Mahé said.

Monette has worked at Bistro de Margot during summers off from his teaching job. A few years ago, Mahé recounted, Monette was making salads, terrines and desserts that included a rich chocolate mousse lightened with stiffly whipped egg whites. “We used the KitchenAid to whip them, but he wanted to do it by hand,” Mahé recalled. “I said, ‘Knock yourself out.'”

Monette grew up in various towns around Vermont. His mother had cooked in the army, but she did not encourage her children to cook at home. “She was sure we would make a mess and never clean it up,” Monette said with a laugh.

He landed his first kitchen job at 15 at Smugglers’ Notch and worked for four years at the now-shuttered Edelweiss Bakery in Johnson. That job did not start auspiciously. “One of the first things I did was scoop cookie dough,” Monette recalled. The baker/co-owner came over to check how he was doing and immediately scraped all the dough back up to redo it himself. It took a few months for Monette to earn back cookie-scooping rights.

He was not academically inclined and never imagined he’d go to college until his girlfriend (now wife) filled out his NECI application. “She kind of did it behind my back because she believed in me,” he said.

Monette spoke with Seven Days about baking to win, starting holiday traditions and how he creates gluten-free, championship-worthy treats for his wife.

SEVEN DAYS: What has been most challenging so far on “Holiday Baking Championship”?

ADAM MONETTE: The obscurity of some of the challenges, like having to write on a pie. Nobody writes on pie; they write on cakes. And turning bread into a cornucopia, making bread look like vegetables and fruits, which is not something that I do every day — during the holidays or at all. Also the time frames. To make good bread takes time, [but] you don’t have time, so you have to make subpar bread, and then you have to make it look like a vegetable or fruit.

SD: We hope to keep seeing you rise to those challenges in the final three shows. Turning to holiday traditions, your Food Network bio mentions that your dad keeps a Christmas tree up year-round. Did he do that when you were a kid?

AM: No, it’s more recent, but it’s true. It’s an artificial tree. He really loves the look of the lights. That part of their house in Brownington almost looks like a satellite Christmas Tree Shop [laughing].

SD: You and your wife have two daughters, right? What holiday traditions are you trying to start with them?

SD: When we chatted before the first episode aired, you said your favorite holiday baked good was tourtière, a French Canadian meat pie. Sadly, that hasn’t made it onto the show, but how do you make it? 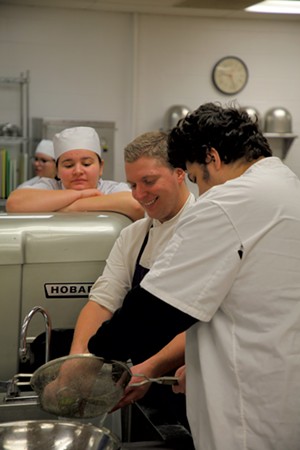 AM: We did have a pie challenge, but it just didn’t fit. I make it most years, but if I don’t, my Aunt Liz will make it, or my mom. Tourtière is the punctuation on the holiday here. It wouldn’t be the same without it.

Some people use a blend of meats, but I prefer just using pork and a little stock. I do a mashed potato that I blend in and also a diced potato that I fold in, so you have two different textures. The spice blend is what makes it: the clove and the nutmeg. I like to toast the spices to get a really beautiful, perfumed flavor.

SD: On the show, it seems like everyone thinks that if they give a shout-out to Grandma, it’ll charm the judges. My grandmothers were not bakers. What can someone like me do who doesn’t have family recipe traditions?

AM: Start small. Some of the favorite things that I remember are not very complicated, like date bars or just bar cookies in general. The thing is to sit down and eat them together. A lot of it has to do with the company and the memory of being with that person.

SD: Baking with kids sounds like fun, but then, like your mother said, it can be a mess. Do you bake with your girls yet?

AM: We have this little three-step [stool] that I pull up to the counter, and they both love it. You know they love to be part of the baking or cooking. That’s really the start, right? Just to be around when someone else is doing it.

They want to crack the eggs. And it’s just a question of being patient as you’re picking out eggshells. They want to be in it as much as possible. We’re getting there with stirring, mixing or putting things on a tray.

SD: I solicited holiday baking questions from friends, and one asked whether it’s really worth making homemade yeast rolls.

AM: Absolutely. It’s not even close. The rolls I make are actually a variation of a challah roll. They’re fast-rising, they’re absolutely delicious, and they make people really happy. They don’t take that long, and they’re the perfect accompaniment to every holiday meal. [See Monette’s recipe.]

SD: Multiple friends asked for your advice on gluten-free baking.

AM: My wife is gluten-free. King Arthur’s gluten-free flour is probably one of the better products out there. The only issue is that it’s very grainy, so you have this granular texture on the palate. When you’re making something, you gotta let it sit and hydrate; that will diminish some of the graininess.

[I] go to French cakes that are made with [mostly] almond flour, like dacquoise [almond and hazelnut meringue] or financiers [almond butter cakes]. Those beautiful cakes use whipped eggs to establish great structure. Anything that has physical leavening and no chemical leavening can have good results with gluten-free flour and almond flour. You don’t have to sacrifice flavor or texture.

The hardest thing is to take a recipe you like and try to make it gluten-free. [But] a quick bread, like apple or pumpkin, can be delicious made with gluten-free flour.

SD: How about tips for the seemingly simple but often problematic piecrust?

AM: The best way to make a bulletproof piecrust is use a food processor. Use ice-cold butter and process it very fine. You want to really pulse the flour and the butter together with the least amount of water possible. If you don’t cut the butter into the flour enough, it gives you a false sense of how much hydration is required. You then add [too much] water, [which creates] gluten, and the pastry becomes tough. I like to use an egg yolk. That gives you fat and gives you hydration. And you’ll always have something that’s incredibly flaky and delicious.

SD: Do you worry about eating too many sweets during the holidays?

AM: You should never feel guilty about having pleasure and enjoying yourself. In the holidays, that’s the time to do it. Be with the people you love and eat the foods you want to eat.

This interview has been edited and condensed for clarity and length.