Adam Monette, 35, of St. Albans will compete in the cinnamon- and peppermint-scented contest that pits 12 bakers against each other in a festive weekly challenge. The 2021 season kicks off at 8 p.m. EST with a two-hour, two-challenge special episode in which a pair of contestants will be eliminated. The last baker standing at the end of eight weeks will win $25,000.

Monette, who earned a baking and pastry degree from the now-defunct New England Culinary Institute, has worked as a culinary arts instructor at the Northwest Career & Technical Center for a decade, he said in a phone interview. A former student recommended him for the cast for the “Holiday Baking Championship.”

While Monette had participated in several professional culinary competitions over the years, including representing the U.S. in the Académie Culinaire de France’s Trophée Passion International in 2017 in France, he had never been on television — nor watched the Food Network show.

The application process involved several video interviews and a couple of baking tests. Monette made a version of sticky toffee pudding for his plated dessert and a single-serving, croquembouche-style cream puff decorated with spun sugar for a banquet dessert.

“I thought, ‘Oh that was nice, it’s probably not gonna happen,'” Monette said. He dismissed it as an interesting experience until he got the call that he’d landed a spot.

Monette traveled to Knoxville, Tenn., for the shoot. He cannot divulge how many weeks he was there nor what he baked, but he did share that his personal holiday favorite is tourtière, a French-Canadian meat pie. He makes it with a lard crust, per a family  recipe. 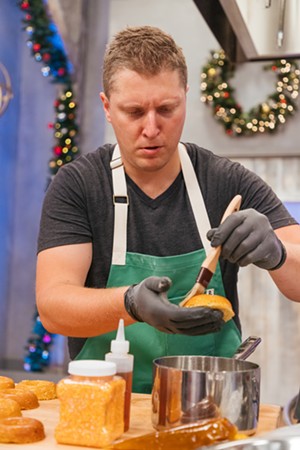 Most of Monette’s warmest childhood food memories hark back to time spent with his mother’s family in the Brownington area. “Everything was centered around food, around baking and cooking and being together,” he said.

He landed his first kitchen job at 15 at Smuggler’s Notch and later worked for four years at the now-shuttered Edelweiss Bakery in Johnson.

That job did not start auspiciously. “One of the first things I did was scoop cookie dough,” Monette recalled. The baker/co-owner came over to check how he was doing and immediately scraped all the dough back up to re-scoop it himself. “They weren’t consistent,” Monette acknowledged. It took a few months for him to earn back cookie-scooping rights.

Monette did not tell his students that he’d be appearing on national TV, but one of his teaching colleagues did.

The reaction of one student, in particular, stands out. The young man “had never said anything to me all semester,” Monette recounted. But when the student learned his teacher would be on the “Holiday Baking Championship,” “he opened up to me. He said, ‘My family watches  that every holiday.’ He was just like a different person.”