Turns out, they were spot on. Last night, in the finale of the show’s eighth season, Monette reigned supreme among the finalist trio, down from 12 original contestants, and took home the $25,000 championship prize.

Monette, 35, had been sworn to secrecy about the show’s outcome since he competed in front of the cameras in Knoxville, Tenn., in July. The eight-episode show was filmed over two and a half intense weeks, he recounted in a 7 a.m. phone interview this morning before heading to school for a final pre-holiday baking push with his students.

On the show, Monette noted that he had learned the almond horn recipe from “the chef who inspired me to get into this profession.” That was Ralf Labelle, chef and co-owner of the now-closed Edelweiss Bakery in Johnson, where Monette worked for four years as a teenager, he said during the phone call. 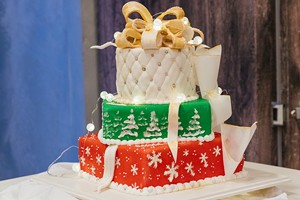 After all the hours of whisking, whipping, frosting and decorating cakes, tarts and other confections, the celebration was remarkably brief. On camera, Monette said, “I’ve never won anything in my life” — and the show was over.

Off camera, there wasn’t much more to it, Monette said. The contestants said goodbye to each other and chatted briefly with the judges. “I went upstairs and signed some papers. They drove me back to the hotel. That was it. I was on a plane back to Vermont,” Monette said with a laugh. “It was just like, ‘Here’s your hat.'”


Monette watched the final episode Monday night with family and friends at the St. Albans Hard’ack Recreation Area lodge. He said he has nothing major planned for his prize money other than sharing some with family. “I just want to give back to my parents, everybody else who helped me get here,” he said.

“I’ve been sitting on this secret for a while,” Monette said, noting that he was only allowed to tell his wife. At the technical center, his students have been constantly begging him to divulge the result. “Like, ‘Wink at me if you won,'” he said with a chuckle. “I’m sure they’ll be very excited.”


He also gave credit to his secret weapon: vanilla beans. At the start of each baking challenge, contestants would literally run to the ingredients pantry.  “It wasn’t for theatricality,” Monette said. “It was solely based upon the necessity of getting ingredients.”

Monette would head straight for the vanilla every time, he said. No matter what flavors he was working with, “Everything I made had copious amounts of vanilla beans in it,” he said . “It was always something that I knew I had to have because it’s a magnifier of flavor. It’s like the salt of the pastry kitchen.”

On Tuesday morning, Monette was headed back to bake with his students. On deck for the next two days were a version of a Paris-Brest with lemon curd, salted caramel and vanilla-brandy crémeux he made on the show; several dozen tourtières, Monette’s own family favorite holiday baked good; and 40 dozen dinner rolls.

Home on the Range

Monette has not watched the show with his students, he said, though many have been following along at home and have come to class with questions about the recipes they’ve seen on the show. He said he has received many emails of support from former students and parents of current students. 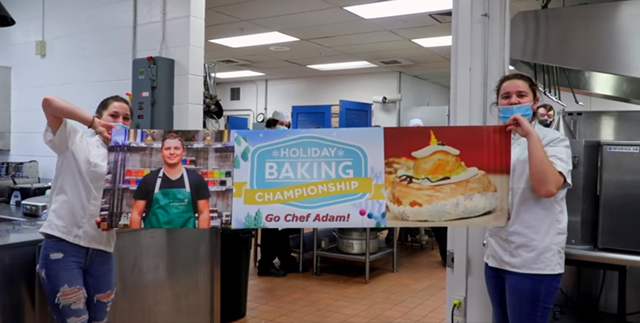 The chef-instructor hopes that students will see, “If I can do it, they can do it … It’s just a question of taking the opportunity.”

Monette added that he and his students might watch the finale together this week, “If we have time and the orders are complete.”

Chef Monette will teach some baking classes for the general public through Vermont Adult Career & Technical Education Association at Northwest Career & Technical Center in St. Albans in 2022. He also plans to do some demonstrations at Smuggler’s Notch.